While Canadian students were not present at the ceremonies this year, members of the The Canadian Battlefields Foundation from both Canada and France, joined in the commemorative ceremonies for the 78th anniversary of D-Day, on June 6th 2022. Photos from the ceremonies at the L’Abbaye d’Ardenne

﻿ In partnership with the Canadian Battlefields Foundation, the Juno Beach Centre Association and the Gregg Centre for the Study of War and Society, the Laurier Centre for Military Strategic and Disarmament Studies is pleased to announce the Maple Leaf Route Webinar Series. Every two weeks from May

Now in its 26th year, the Canadian Battlefields Foundation Study Tour is intended for Canadian university students who want to learn more about the role Canadians played in the liberation of Europe in the World Wars. This year’s tour, led by Professor Geoff Hayes (University of Waterloo), Professor

We had a busy past few days as we visited many military cemeteries and D Day Academy which was a military museum filled with trucks and Canadian, American, and German military equipment and guns. Today (June 5th) we started off the day by learning about Operation Epsom by looking at Hill 112 which was 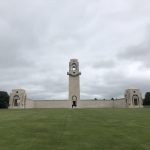 Today was probably one of the most interesting days that I have found thus far. Starting of at the Australian memorial and monument for the First World War along with the Sir John Monash Center. This memorial was definitely one to remember as the way they told their story through their various films

Wow, day #7 already! What an experience this has been for all of us, with so much more to come in the next nine days. We are all very fortunate to have this experience with such knowledgeable leaders and passionate fellow-students. As you can see from the previous blog posts, we have had very busy days

By five in the morning we were already loaded up in our vans rolling down the road from Bayeux to Bernièrs-sur-Mer. With the Gendarmes setting up an intensive cordon of roadblocks around the D-Day Beaches, it was imperative that we arrive as early as possible. Although possessing the necessary passes

Today was another busy day following Canadian soldiers through the Normandy Campaign in 1944. We have seen so much through the last few days that it is hard to pick one thing to single out to talk about. An overriding theme that has struck me though is the appreciation of the French people for what

Today we went to the D Day Academy to get a firsthand experience of some of the weaponry and machinery used in the European Theatre. The gentleman who runs it, Jean-Pierre, was very nice and encouraged us to pick up guns and climb over the vehicles. I love that sort of stuff, so I was really in my element

Our day began with a trip to the WWII cemetery at La Cambe, where German soldiers of many ranks and divisions are buried, including soldiers of the German SS. An academic interest in forms of commemoration carried me as far as the front gates, but I did not go further. My family lived in the Netherlands

Today was a different sort of day than most of the ones we’ve had so far on the tour. We started at the La Cambe German Cemetery and that was a very tough place for everyone to visit. There was a heavy, sad feeling about the place and we all struggled with different emotions and reconciling the idea

Today marks Day 9 of our battlefield adventure, and in spite of our aching feet, overfilled brains, and some sweltering heat, we’ve (mostly) remained happy and eager to continue our great learning experience by visiting more sites and sharing more history. As seen in the past couple blog posts, we’ve

This morning we woke to a beautiful morning in Dieppe. When we were loading the vans, we realized that the right side mirror on one of our vans had been stolen. Despite that mishap, it did not put too big of a damper on the day. We had our morning briefing on top of a hill overlooking ‘Green beach’

Second day of Normandy. After going to see the parachute divisions side of the D-Day landings, it was time to move onto the beaches. We started off by seeing the Longeau Battery, where I experienced my first ever time of seeing WW2 beaches. There were 4 massive gun stations, with a central command bunker

Wow, day #7 already! What an experience this has been for all of us, with so much more to come in the next nine days. We are all very fortunate to have this experience with such knowledgeable leaders and passionate fellow-students. As you can see from the previous blog posts, we have had very busy days

Wrapping up Day 6 was a memorable one. For me, today was about individual remembrance. We received wonderful presentations on individual soldiers from two of the 2019 tour members; Cora and Mark. Cora shared the story of A.V.S Nordheimer, who fell at The Battle of Moreuil Wood. Mark introduced us to

CBF Day 7 – Longueval to Dieppe: Only a week so far, this expedition feels much longer – although exactly how long I cannot say. Thiss is not a bad thing! Far from it. I have been very impressed with the amount of high quality content we are covering in the limited time we have available

A Day To Remember

I must say, I am very impressed with the CBF tour so far. From the expert knowledge of the guides to the quality of presentations from the students, it has been an informative and moving experience. Today we visited a few significant Great War sites. We started the day with our second Newfoundland caribou

This small tree at Beaumont Hamel marks the furthest point the soldiers of the Newfoundland 1st Regiment managed to reach, and the end of my two minute walk Today’s battlefield experiences drove home the reality of the cost in human lives that movement forward could cost in the First World War. At 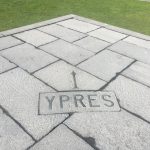 Day three of our CBF adventure has been marked by a vast array of emotions and experiences. On the one hand, our group of 12 students and two guides have enjoyed periods of raucous laughter or quiet giggles, all while frantically trying to remember each other’s names. On the other hand, though, today

Today marked the third day of our adventure and it was packed full of locations, sights, and experiences. We started off the day by visiting St. Julien then went on to see Langemark, Hill 60 and 62, Passchendaele, Tyne Cot Cemetery, and a few small cemeteries as well. I think the moment from today that 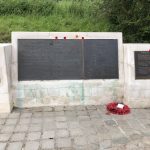 We all safely landed in Paris a little after 9 this morning. Once the team got through customs and baggage claim, and we finally secured the rental vans, we were heard towards our destination. Once arrived in Ypres at approximately 3:30pm, the team leads (Jérémie and Marc) and a small group of students 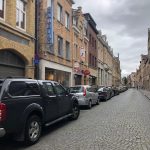 Sunday May 26: Travelling to Ypres

Today we continued our journey on the CBF battlefield tour. Our day began with arriving at Toronto Pearson Airport from all different areas of Canada. We all gathered as a group and boarded our plane to Charles de Gaulle. The flight went by fast, and by 9:00 am (Paris time) we had landed and were ready 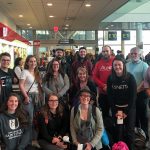 On May 25, all twelve of the selected students for this year’s tour met in Toronto (Pearson Airport) with Professor Marc Milner and myself. Below is a group photo before boarding. After we land in France (Paris), we will head north to Ypres (Ieper) in Belgium. For more information about our tour