Following the battle of the Scheldt, there was a largely static period of three months spent in planning and preparation for the spring offensive, although some sharp clashes took place. In February 1945 the Allies launched the great offensive, which was designed to drive the enemy back over the Rhine and bring about his final defeat. 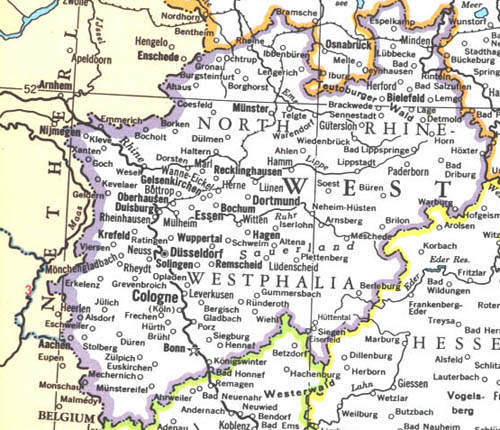 The first phase of the campaign began in the north where Field-Marshal Montgomery had under his command the Ninth U.S. Army as well as his British and Canadian forces. There were to be two formidable thrusts. The First Canadian Army would advance from the Nijmegen salient southeastwards to clear the corridor between the Rhine and the Maas, while the Ninth U.S. Army would drive northeastwards and converge with the Canadians on the Rhine opposite Wesel.

In this battle the First Canadian Army, again under General Crerar’s command, was strengthened by the addition of Allied formations, and became the largest formation a Canadian officer had ever commanded in action. The task called for the clearing of the great Reichswald Forest, the breaking of the Siegfried Line, clearing the Hochwald Forest defences and closing up the Rhine.

Given the code name Veritable the offensive was launched on February 8, preceded by a crushing air and artillery attack on the enemy positions. But progress was not easy. Mud and flooded ground hampered the advance and at times troops floundered through water three feet deep. Moreover, the American drive from the south was delayed and the enemy was able to reinforce his positions. Nevertheless, the outer defences of the Siegfried Line fell and, far on the left the “water rats” of the 3rd Division were able to cross the flooded land and achieve significant gains. Thereafter, in a foot-by-foot advance through the pine forest of the Reichswald and the waterlogged countryside, the British and Canadian soldiers fought their way forward, until on February 21, they had cracked the vaunted Siegfried Line.

The formidable enemy defences about the Hochwald Forest and Balberger heights still barred the way to the Rhine. The assault against these positions was launched on February 26 by the 2nd and 3rd Canadian Infantry Divisions and the 4th Armoured Division. The advance was an agonizing repetition of the Reichswald battle with troops holding slight gains against fierce enemy counter-attacks as tanks, handicapped by mud and rain, struggled forward. It took until March 4 to clear the enemy from both objectives. The Americans were now also making progress from the south. Resistance continued until March 10 when the enemy blew up the bridges of the Wesel and withdrew to the east bank of the Rhine.

During this month of fighting, First Canadian Army lost 15,634 killed, wounded or missing, including 5,304 Canadians, but they had gained the banks of the Rhine which marked the last major line of German defence.

“It is only by standing on these hallowed grounds that you can truly understand the extent of the sacrifice of the Canadians soldiers as they fought their way through German lines: the courage, determination and sheer will required of these young men to push forward in spite of all obstacles. You cannot really appreciate all of this only from books and maps.”