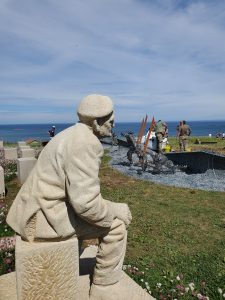 Second day of Normandy. After going to see the parachute divisions side of the D-Day landings, it was time to move onto the beaches. We started off by seeing the Longeau Battery, where I experienced my first ever time of seeing WW2 beaches. There were 4 massive gun stations, with a central command bunker that we also explored. There were only a dozen chunks of concrete taken out the of bunker, which shower just how thick and strong that concrete would be for the battleships to make essentially no damage. After the cliffs, we went to the Port Arromanches museum, where I learned for the first time about the man-made port used by the allies to reach the shore; this was one of the most interesting facts that I have learned so far, to see how much innovation and technique was used by the engineers and planners to map out this attack left my mind bewildered. After 2 informative videos on the D-Day landings, we moved onto Juno Beach. We learned about the different construction levels of the bunkers at the beach, and the visitors center had a very emotional video at the end to show the continuation of the war’s memory. If I had to pick a moment from the day that hit me hardest for the realization of what this tour means to me, it was the end of the video where it stated that on Juno Beach they (soldiers) walk with us (civilians). The video spoke on the important matter of, not only being told these stories of the world wars but also, experiencing the history and passing it on to future generations – to make sure that they will never be forgotten. To conclude, after giving my three presentations and physcially seeing the places that were taught to me over the years, I get it now. I understand it. I see how it is our duty to take in these experiences, stories, take the pictures, to pass them on to others to make sure that these men and women have their lives continue on in their memory.