This morning we woke to a beautiful morning in Dieppe. When we were loading the vans, we realized that the right side mirror on one of our vans had been stolen. Despite that mishap, it did not put too big of a damper on the day. We had our morning briefing on top of a hill overlooking ‘Green beach’.

As we drove along the highway we stopped at a Canadian cemetery in Pourville. This picturesque town was home to Monet at one point in time. We also stopped at several cemeteries visiting soldiers from RCAF 403 Squadron.

Next we stopped at a monument in Veraville, which was commemorating the 1st Canadian parachute battalion who landed in the early morning of D-day.

From there we made our way to Pegasus Bridge in Bénouville. There we took part in the museum, where Cpl. Frederick George Topham, of the 1st Canadian parachute battalion was honoured. There was a photo, his biography, and his medals, including his Victoria Cross.

Within the city of Bénouville we got our first taste of the D-Day ‘festivities’ as the streets were filled with a mix of international visitors. We saw many people in uniform, and some had original outfitted vehicles.

Our last stop of the day was at a massive store. There we did groceries for the next few days of which we will be spending at the Moulin Morin. 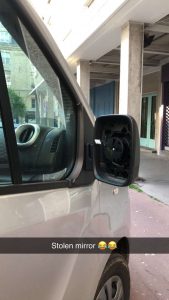