Reflecting from Home, by Eric Story 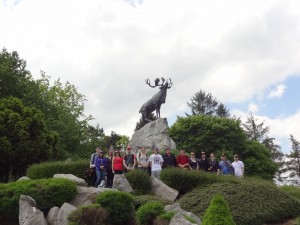 The other night, I was walking along the riverbank of the South Saskatchewan River with one of my good friends, telling her some of the more memorable moments of my trip to France. As the red evening sun slowly began to stretch our shadows to extreme lengths, I began by telling her about our visit to Notre Dame de Lorette French National Memorial and Cemetery. I explained how even we, as Canadians, tend to forget the contributions made by our allies. This cemetery opened my eyes to such ignorance. Many soldiers fought for their fellow comrades; allied countries did the same. They offered a helping hand when another needed it. It was not an individual, but rather a team effort that helped them prevail. Apparently, this did not dawn on me until I entered the gates of Notre Dame de Lorette, and saw the endless rows of worn, white crosses. I then entered the church, and saw a statue of a priest hovering over a French soldiers’ grave. It was then that something hit me like a bullet in the chest. I tried to hold it in, but I simply could not. I turned away from the group, and wept. 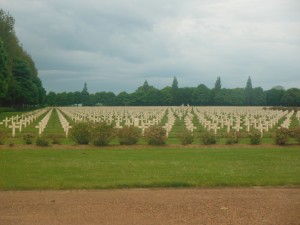 My friend and I continued our walk, this time through a rather sheltered area of trees. As the evening birds jumped from branch to branch, chirping happily as they did so, and the wind silently rustled through the leaves, I carried on. The scene shifted not far from Notre Dame––to Vimy. It was here that I was to meet “my guy”: Reginald John Godfrey Bateman. Before going on, however, I explained to my friend that it was hard to describe my feelings at that point. One would have to go through something similar to truly understand the emotions I felt when I approached that overwhelming monument. But I continued on anyways, and did the best I could. I told her that when I finally reached the back of the monument, and found the letter ‘B,’ I hurriedly scanned the wall for Reg, eager to finally ‘meet’ him. Bar, Bas, Bat, Bav… He wasn’t there. My heart sank. My stomach bottomed out. I had travelled all this way to see somebody I had been researching for over a month. He had become more than a research project though, and even more than a shadow of the past: to me, he had become my mentor. He exuded kindness, humour, and intelligence, all characteristics I hope to embody by the time I leave this world. The words of Professor Graham Broad best sums up my feelings towards Reg: “He has become a friend.”

As the two other presentations at Vimy concluded, I could not help but feel bitter disappointment and sadness, and perhaps even anger with myself that I could not find him. I even contemplated that I had mixed up where he was buried. But with the help of a friendly guide, I was finally able to find him, and pay the respects I had been wanting to for quite some time. 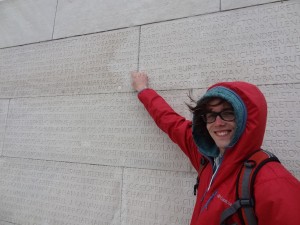 By then, my friend and I had just about completed our walk. We continued along the boardwalk, passing the empty water park, as the moon shone down upon us. I wanted to tell her one last thing before we drove home. I sat down on a stone bench, and found Eric de Kroon’s “A Commitment to Remember” on my iPhone, and began to read it aloud. After I finished, I looked down at the calm water, and the reflection of the white moon on the black glass in the night. I then realized what my favourite part of the trip was: my travel companions. Mama Erin, Dave and Cultured Karl. Andrew’s ramblings about hooliganism and his endless knowledge of military history, and Graham’s quiet nature, which momentarily hid his brilliance as a teacher. Eric the Wise’s Forrest Gump-like voice, and Eric the Wanderer’s constant use of the word “bro.” Bruce’s hilarious jokes to Becky’s constant quoting of popular culture, to Katie’s famous ‘mandals.’ Colleen’s dry sarcasm, and Lacey’s laugh, which I can still hear all the way from Saskatoon. Amanda’s interest in everybody’s studies and hobbies, and perhaps most important to me, especially when I felt far from home, Sanna’s reminisces of Saskatoon. I miss our late night conversations and arguments about education, politics and history. I miss our van rides around France. Most importantly though, I miss you guys. After sitting for a while longer, gathering my thoughts and emotions, we got up, walked to my car, and drove home.