The 10th of June was a rather somber day for me. Our group learned more about how the war impacted civilians in France with the help of a museum in Falaise called: Memorial des Civils dans la guerre. Here we learned about how children were educated under German control and the types of propaganda used to portray the Germans and others such as Petain, in a positive light. The museum is filled personal accounts of those who lived in Falaise (and maybe other areas) as well as those who survived the Holocaust. There was also a film designed to give the viewer a better understanding of what it would have been like to be a civilian during the war. This museum was significant to me because I could relate more to it as I have no military background. Having to hide while two well equipped armies fight over your city or town must have been horrifying especially without having the ability to defend yourself. I remember David Patterson telling me about how the civilians were often told to leave their homes but if they couldn’t, they would have to stay in the basement while the soldiers occupied the home.

We also visited the memorial at Montormel which is dedicated to the last phase of the battle of Normandy when the Germans became surrounded. While this was certainly a victorious day for the Allies and the French civilians, I couldn’t help to think of the many Germans who died during that phase of the war as well as how many began to question the war itself and the ideologies of Nazi Germany if they had not already been doing that.

Today was a moving and emotional day of ceremonies hosted by the Canadian Battlefields Foundation in the city of Caen. We took part in three ceremonies in different locations around the city, each with its own theme: education, commemoration, and remembrance. In the time since these ceremonies I have taken the opportunity to reflect on how these themes emerged not only today but throughout the trip as a whole.

We began the day at the Memorial de Caen where the first ceremony would be held following lunch. We had some time to visit the museum’s exhibits which were on the whole very well designed, and we watched a powerful short film documenting the D-Day landings. It has been interesting to consider some of the differences in the topics emphasized by various countries according to national experiences, common narratives, and myths. One important observation we made was that there was a lack of Canadian content in the exhibits we visited. Our group leaders explained to us that a Canadian Memorial Garden was created at the museum to recognize the Canadian role in the Battle of Caen. This was the location of our first ceremony.

The Canadian Memorial Garden features a reflecting pool with a Latin phrase inscribed on it, meaning “No day will erase you from the memory of time.” The theme of education was prevalent during this ceremony because there was an emphasis on the importance of younger generations continuing to pass on the stories of those who experienced the war. The museum grounds were a very suitable location for this theme as well because museums are one way that knowledge of the past is transmitted. There are some fellow students on the tour who wish to work in museums in the future in order to share their passion for history with a public audience of all ages. On a personal note, my experiences on this tour have greatly influenced my professional development as a teacher. I look forward to passing on the knowledge and stories I have gathered during the tour, and hope to one day return to the battlefields leading a student tour of my own.

The second ceremony took place at a Canadian memorial in the streets of Caen. The theme was commemoration, which I found very fitting because the ceremony demonstrated the collective nature of commemoration. As we all gathered on the sidewalk and onto the street, citizens of Caen began to come out onto their balconies to watch the ceremony. There were people of all ages – some who may have remembered the liberation and young children who are being brought up within a strong culture of remembrance. I was honoured to have the opportunity to lay a wreath with the Honourary Ambassador of the Regiment de la Chaudiere in France during the ceremony to commemorate the Canadians who helped liberate Caen. One aspect of all of the ceremonies we took part in that surprised me was that the French people know the words to O Canada. As our national anthem began to play, a chorus of singing filled the streets, reflecting the harmony in these French and Canadian commemorative efforts.

The final ceremony of the day, and the most sombre was at the Abbaye D’Ardenne where we gathered in memory of the 20 Canadian soldiers murdered by the 12th SS Panzer Division. This ceremony focused on remembrance, honouring the soldiers individually as each of the students on the tour laid a maple leaf brought from Canada. Throughout our tour we have highlighted the stories of individual soldiers who gave their lives during both world wars. This has allowed us to consider the personal elements of war. I was overcome with emotion during the moment of silence as I heard birds in song flying between the trees of the Abbaye’s garden, creating a feeling of peacefulness to contrast with the horrors these Canadian men endured. I also glanced over at the banner of their pictures and names throughout the moment of silence and the singing of O Canada. They are among those we must remember. 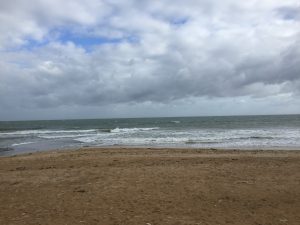 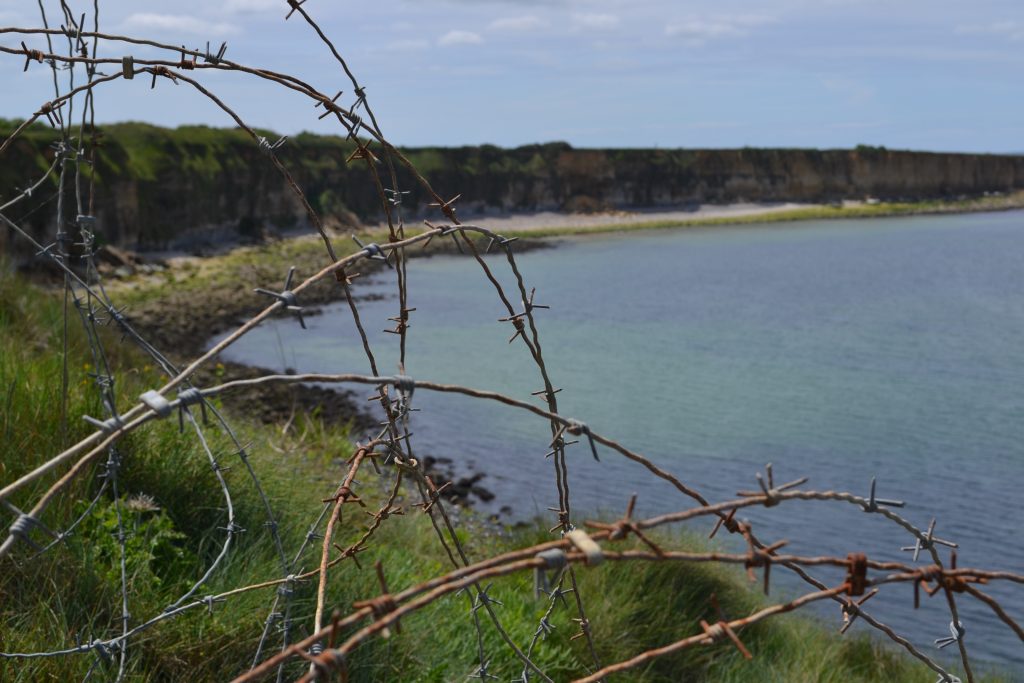 We all laugh at the old man’s imitation of Charles de Gaulle in the D-Day Academy. As we separate into small groups to look at artillery and military equipment collected in the warehouse, the old man joins us and starts talking about his experiences in 1944.

The Allies liberated his town when he was just six years old, yet he remembers it clearly. The years afterwards were rough on him, and his blue eyes fill with tears. He starts to cry, saying he was unwelcome in his own village in the post-war. He had made friends with some of the soldiers, and they were now a part of his life. Watching this man cry, one of us holding his hand, shows that the scars of this war still run deep in this country.

The countless little hamlets and towns we drive through, bearing the flags of both their country and their liberators during the war are a testament to this enduring connection.

As we participate in the D-Day ceremonies tomorrow, I find myself reflecting on the hardships faced by both our soldiers and the civilians they were sent to protect. This tremendous sacrifice, and the thousands affected by war, even to this day, rings true in the old adage—lest we forget.