Of Contrasts and Conundrums

Today was a study in contrasts. The weather, foggy and cold at first, the turned into a warm and sunny evening (where were these clear blue skies when trying to see the battlefields and vantage points in the distance, I ask you?).  The tour also combined several different location, national cemeteries, and approaches to remembrance.

We had a full day. At 8:30 we headed to the D-Day Academy. Following a particularly invigorating ride in the Royal DUKW, we went to La Cambe, Pointe du Hoc, Omaha Beach, the Normandy American Cemetery, and Longues sur mer. After arriving home around 6, we sat down to supper and enjoyed the peaceful scenery (and braying donkey) at the Moulin Morin.

As we wound our way through Normandy, several stark contrasts arose, particularly between cemeteries, and approaches to commemoration.

First, the differences between cemeteries in terms of nationality and design provoked ongoing conversations contemplating historical insight and memory.  Last week, I discussed the First World War German cemetery Neuville-St.-Vaast and its message of peace.  Today’s cemetery at La Cambe carried the same message, however, the context of the Second World War provoked a more complex array of thoughts and emotions when considering the soldiers who rest there.  The graves also differ. For example, La Cambe had a mass grave in the center and the headstones were laying flat on the ground, a different visual impact than dark crosses (especially since the graves are white in the other cemeteries). Also, while the Canadian cemeteries we have visited list ages, as well as personal messages, these markers did not have much detail. In comparison, the Normandy American Cemetery was more up to date than La Cambe, and much larger (especially when you consider that La Cambe holds 40,000 soldiers, and the Normandy American Cemetery holds 9,000).  There were no messages on the graves, and there were more sections dedicated to monuments. The space was far more intricate, and different panels reflected the same themes of commemoration present at Pointe du Hoc. 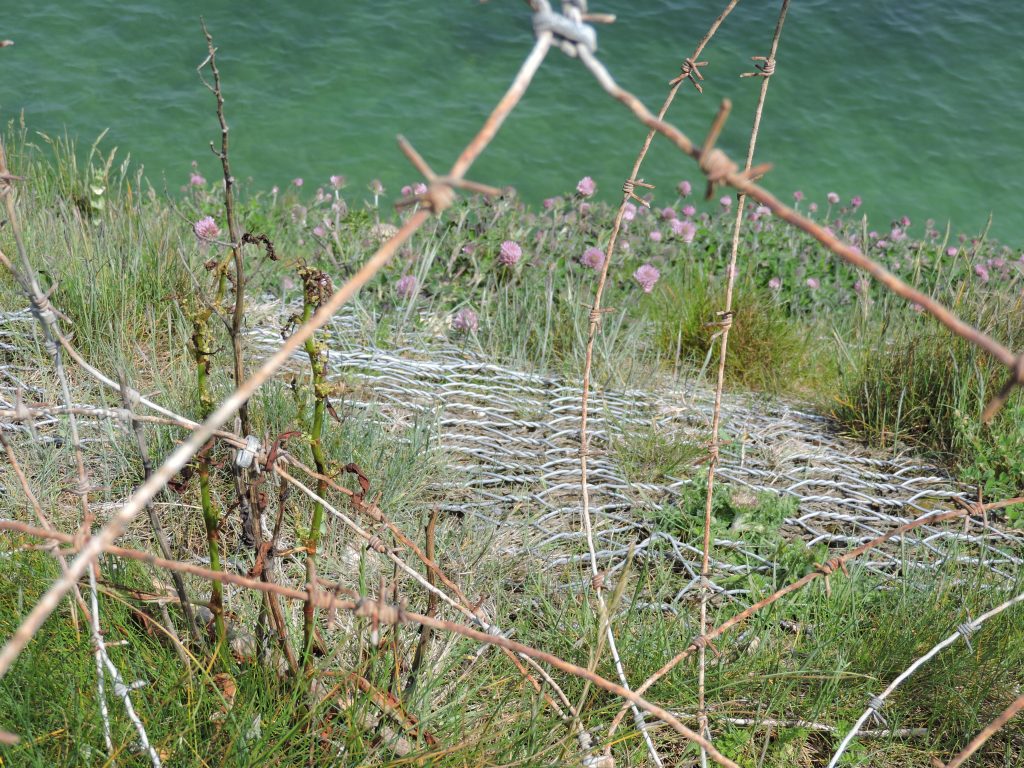 The second major contrast of the day was the approach to remembrance at different locations.  More specifically at the D-Day Academy and Pointe du Hoc.  Last week, at the Juno Beach Centre we saw an amalgamation of interactive approaches to experiential remembrance- through visiting a bunker, outpost, and the beach, then following the path of the museum (which was engaging and highly interactive).  Today, we spent a couple of hours at the D-Day Academy, where we learnt about different arms from the Second World War.  This, however, was not a conventional site- we got to climb and sit in trucks, hold weapons, crank an air horn, and generally explore the vast warehouse of contemporary articles. Before starting to explore, Mr. Benamou talked about the academy, and said it had been designed to incorporate all five senses. It certainly reached this goal, however, each person had the opportunity to experience them at their own pace and in their own way.  Pointe du Hoc, and even the American Normandy Cemetery were quite different in this.  Their three themes were competence, courage, and sacrifice.  The sites had many panels to reinforce this, as well as a clear path which reinforced the message.  While there was a bit of flexibility in where you could walk, and what pace you could go each section was signposted and followed through from start to end.

Both the cemeteries and sites prompted a substantial amount of reflection, and for today have left many more questions than answers. How do we remember the dead?  How do we come to terms with the light and dark parts of history?  In what ways to we approach remembrance, and is there a “best” way?  What benefits are there to solid messages? To meandering paths? To deliberate communication of content?

I have no answers for these questions, but asking them lead to many interesting and in-depth conversations- a process that is key to remembrance itself.