Today was a rather emotional day, as five of us commemorated individual soldiers at Groesbeek cemetary. I chose my soldier in part because he belonged to the Calgary Highlanders (my home city), and because he was very young when he died at just 19 years of age. I had a variety of soldiers from the Calgary Highlanders that I could have choosen for similar reasons, but I felt attatched to Ralph Bernard Aandal because his personal letters really spoke to me. As Geoff said today nothing happens by chance, the soldier chooses you. I feel very privlidged to have been able to read the letters that Private Aandal had written to his family during his commemoration today, the contents of which had us all smiling as we chuckled at his youthful quips:

“Well, I’ve left England and am now in Belgium. I had quite a bit of fun in England. I saw all the big art galleries and the wax museum. It really was worthwhile seeing. By the way, how about sending me some cigarettes? I am not broke but I hate the cigs they hand us. Make it Players Mild if you can. The meals are lovely – hard tack mutton or Bully beef – lovely! So long. Love Ralph. I am in a new place now. A. Coy. Calgary Highlanders” (13 November 1944).

“Say hello to the rest of the family. By the way Pop, don’t let them chase you around too much. Give a woman an inch and she’ll take a mile. Love Ralph” (14 December 1944).

It seems to be a bitter sweet feeling, standing there in front of the soldiers grave forming memories of someone you have never met, but whose life and death have come to mean so much to you. I especially liked Groesbeek Cemetary because there was a variety of physical commemorations left by other people.
At one headstone school children had drawn out the border of Alberta and the border of the Netherlands to explain where a soldier came from and how he came to rest in the Netherlands. At another headstone someone had left a bottle of Canadian maple syrup made in Quebec from which they may have poured libations for the soldier as it was half empty. At many of the graves photos of the soldiers had been placed along with flags, pins and small notes. We were delighted to discover an entire scrapbook at one soldiers grave that contained photos of him, explained his life, and explained the battles in which he was involved. Today we were saying that what we are doing is important in order to keep the memories alive. Some soldiers (and in fact one that we commemorated in depth today) had no family, or have no living family to continue to commemorate them and tell their story. Many of the tombstones are inscribed with sayings such as: “lost but not forgotten,” “oh for a glimpse of your grave, only to lay a flower at your head, mother.” And “love and rememberence live forever.”

Every soldier has a story that deserves to be passed down as a form of cultural trancendence.

Everyone knows the poem Flanders fields, but not everyone has read Moina Michaels reply (the American woman who also took the initiative to make the poppy the symbol of remembrance.)

Here follows her poem, which beautifully illustrates our role in the culture of commemoration :

We shall keep the faith

Oh! You who sleep in Flanders’ Fields
Sleep sweet – to rise anew;
We caught the torch you threw,
And holding high we kept
The faith with those who died.
We cherish, too, the Poppy red
That grows on fields where valor led.
It seems to signal to the skies
That blood of heroes never dies.
But lends a lustre to the red
On the flower that blooms above the dead
In Flanders’ fields.

And now the torch and Poppy red
Wear in honour of our dead.
Fear not that ye have died for naught:
We’ve learned the lesson that ye taught
In Flanders’ fields.

*The entirety of Private Aandals letters can be read at:
http://www.calgaryhighlanders.com/history/highlanders/personalities/aandal.htm 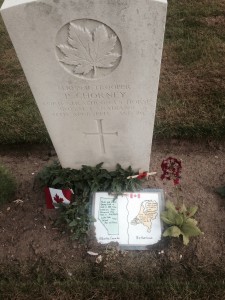 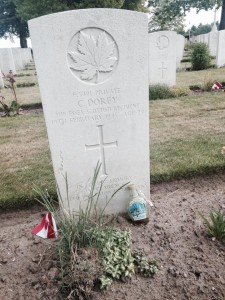