Today was the second and final day dedicated to Operation Jubilee, the August 19th, 1942 Canadian raid on the French port of Dieppe. In the morning we visited the beach at Pourville where the South Saskatchewan Regiment and Queen’s Own Cameron Highlanders disembarked. Although operations went slightly better here compared to the rest of the sector, both regiments ended up having to retreat. By that time, the operational failure of Dieppe had been so drilled into the soldiers’ heads that this particular defeat did not stand out.

What did stand out, however, was our next stop.

The Dieppe Canadian Cemetery was one of the most emotional parts of the tour for all of us. In the vast majority of cemeteries, the dates inscribed on the graves vary widely. It is a poignant testament to the calamitous events of that day that nearly every headstone sported the same date. The human loss was further exemplified by three excellent presentations. I often marvel at what my fellow students were able to uncover about their chosen soldier and how powerful it can be to bring them to life once again in the act of remembrance. The realization that I could research and resurrect any one of those soldiers at that cemetery was especially profound. It adds a whole new dimension to the discipline. 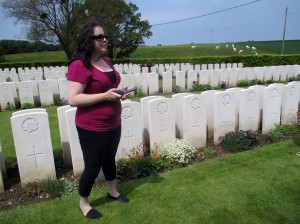 I have also noticed that we go through many emotions during student presentations about fallen soldiers. When I presented my soldier, however, I experienced an unexpected one: pride. As I discovered his life’s story the sadness of his passing receded from my mind and I could not help but become engulfed in the extraordinary accomplishments of an ordinary individual thrust into a difficult situation. I was enthralled by his bravery and his devotion to his family. He was a good man and I was proud to play a role in keeping his character alive. Now it is up to us to keep all of them in our thoughts and in our hearts.

I read an excellent epitaph on the base of a grave in that cemetery: “We all loved him. We still do.”