My name is Graham Broad and along with Andrew Iarocci I’m one of the guides on this, the 19th Canadian Battlefields Foundation Battlefield Study Tour. In about an hour, we will be departing, along with twelve students from across Canada, for two weeks’ travel and study in Belgium and France.

Why do we study Canadian battlefields and commemorate Canada’s fallen? There are many reasons, of course. To satisfy our historical curiosity, or perhaps to follow in the footsteps of a family member who served in the wars, or because we feel gratitude for the sacrifices made by those who fought and died.

Lately, I’ve been thinking more and more about that last reason.

The Duty of Commemoration

Three weeks ago, at the annual Laurier Center for Strategic Military and Disarmament Studies Military History Colloquium (one of Canada’s best small history conferences, by the way), I attended an excellent and very moving talk by Christophe Collette, a teacher at Victor Lepine school in Caen, France.

Every year, M. Collette leads his students in commemorating Canadians who were killed in the Battle of Normandy. Why? Because, he said, “they restored my country’s freedom and dignity.” Commemoration, he said, is a “moral duty.” It’s something we must do because “we do not have the right to ask someone to die for us.” The debt owed to those who fell cannot be repaid, but we can try to live good lives, moral lives, in an effort to earn the suffering and sacrifice of our fallen. Commemoration is part of that process.

I’d like to introduce the twelve students who have been selected for this year’s tour, each of whom is trying, in his or her own way, to live up to that duty that M. Collette spoke of. They were selected from one of the largest and strongest pools of applicants the CBF has ever had, and truly represent the best and brightest of Canadian students today. 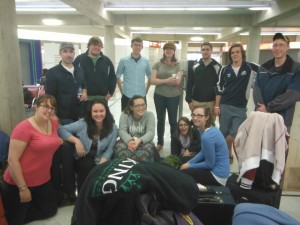 And Lacey Zukewich, University of Manitoba

My dad, now retired in Toronto, was a (private) pilot and we used to go up quite a bit. But I’ve never loved the experience of flying, I have to admit. What business do I have being at 37,000 feet? But nowadays when flying nerves hit me, I think of people like Captain Eddie McKay, Royal Flying Corps, who flew these over the Western Front. This is like living in a palace by comparison.