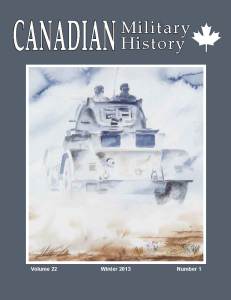 Check out the new Canadian Military History journal which came out in April! See the table of contents as well as the featured article and abstracts below.

Crossing Boundaries on the Battlefield: The Possibilities of Teacher Study Tours for Substantial Professional Learning

Abstract: History education in schools is being revolutionized. In Canada and around the world ministries of education, teachers, museum curators, public historians and scholars of history education are embracing new approaches to teaching and learning which include acquiring historical information but move beyond that to focus on developing historical thinking. A key area of capacity building to ensure the success of these reforms is the preparation of teachers to use these new approaches well. There is considerable evidence that both the initial preparation of history teachers and the professional development available to in-service teachers are not consistent with the disciplinary approaches advocated for history education in schools. This article describes recent trends in history education and argues that study tours combining attention to new developments in historiography with consideration of their implications for pedagogy have great potential to provide the kind of professional education necessary to support teaching that fosters growth in historical thinking.

J.L. Ralston and the First World War: The Origins of a Life of Service

Abstract: James Layton Ralston is well-known in Canadian history for his role as minister of National Defence during the Second World War. Yet he had a long and distinguished career before the 1940s. This article reconstructs Ralston’s early life, up to and especially during the First World War, when he rose to command the 85th Battalion (Nova Scotia Highlanders). For Ralston the war confirmed a sense of concern for and service to others with which he had apparently been raised from an early age. A study of his experiences during the war also tells us much about his many strengths of character, and hints at some of the less positive personal traits that would come to cause him difficulty in later years – as well as the origins of his devotion to veterans, and his views towards conscription that shaped his later positions as a public figure.

The Burns-Simonds Debate Revisited: The Canadian Defence Quarterly and the Principles of Mechanized Warfare in the 1930s

Abstract: Driven by the desire to stimulate the collective intellect of the interwar Canadian military, E.L.M. Burns constantly expounded solutions to the problems of modern warfare. Within the pages of the Canadian Defence Quarterly, Burns found a forum in which he could develop, discuss, and disseminate his views on mechanized and armoured warfare. As one of his most significant contributions to the CDQ, Burns defended the core argument that all-arms fighting formations with a nucleus of highly mobile armoured units should be organized based upon the fundamental principles of balance and flexibility.

Abstract: This article explores the organization and activities of the British-Canadian Recruiting Mission which recruited more than 33,000 British subjects living in the United States for the Canadian Expeditionary Force in 1917-1918. Recruiting operations and cooperation with the United States Army are discussed and statistical summaries are presented showing the recruits’ origins, the corps they were assigned to and the effect on the reinforcement flow to select Canadian battalions in France. The article concludes that the Mission may have recruited a large number of men, but in the event was a failure because the vast majority of British subjects living in the United States ignored the call to arms.

Abstract: Bruno Bobak enlisted in the Canadian army in 1943 at the age of 20. As an amateur artist who sketched his bunk mates for extra money he came to the attention of the Historical Section at Canadian Military Headquarters in London and was taken on strength as a service artist. After completing officer training in the summer of 1944 he became an official war artist and served with 4th Canadian Armoured Division from December 1944 to July 1945.  The two years he spent as a war artist provided him with the equivalent of the art schooling he had never had and it allowed him to become a painter, which he continued to be for the next seven richly productive decades.

Abstract: Canadian Ethel Mulvany, a survivor of internment in Singapore 1942-45, published the Prisoners of War Cook Book in 1946. The subtitle is chilling: This is a Collection of Recipes Made by Starving Prisoners of War When They Were Interned in Changi Jail, Singapore. Faced with starvation, the women prisoners gathered to recite the recipes of their favourite meals. By discussing and dreaming about food in this way the women were helping to slacken the pain of hunger. For Mulvany and the others it was a survival tactic. In a place where no diaries were allowed, Mulvany’s prisoner of war cookbook has historical significance and reveals the women’s POW culture and the importance of creativity in the worst of circumstances.

Abstract: During the interwar period, the Royal Canadian Air Force reoriented itself from an exclusively civil to a military service. In doing so, it assumed primary responsibility for Canada’s direct home defence, put in place a command and administrative air defence structure spanning Canada, and gained coequal status with the other services. Moreover, by 1939 the air force had on hand a cadre of technically trained staff officers prepared to take over the many higher appointments created by the expansion required to meet the demands of the Second World War.