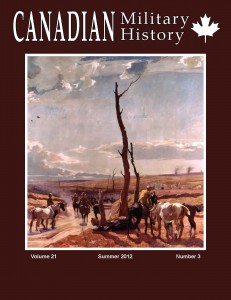 journal which is hot off the press! See the table of contents as well as the featured article abstract below.

“When suitable arrangements could be made”: The Geneva Convention, Medical Treatment, and the Repatriation of German POWs in Ontario, 1940-46

Abstract: This article investigates some of the problems in using the Geneva Convention as a way to evaluate internment operations in Ontario during the Second World War. It focuses on how the Canadian authorities dealt with the challenging issues of medical care and the repatriation of seriously ill German prisoners of war at camps in Gravenhurst, Espanola, and Monteith. This paper demonstrates that the treatment of German POWs in Ontario was dictated by the changing context of the war, the threat of reprisals against Canadian POWs in German hands, and the failed bilateral POW exchange negotiations between the Germany and Great Britain. A principle of reciprocity, not the application of international convention, governed the treatment and repatriation of German POWs.

“You Have Shut Up the Jerries”: Canadian Counter-Battery Work in the Clearing of the Breskens Pocket, October–November 1944

New Men in the Line: An Assessment of Reinforcements to the 48th Highlanders in Italy, January-October 1944