Today was a different sort of day than most of the ones we’ve had so far on the tour. We started at the La Cambe German Cemetery and that was a very tough place for everyone to visit. There was a heavy, sad feeling about the place and we all struggled with different emotions and reconciling the idea of having a memorial in the form of a cemetery (resting place) for the men who fought under Hitler’s Nazi regime during the war. We all felt silent and heavy after that site. 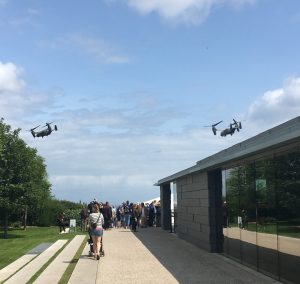 We visited several American sites today as well. The first was Pointe du Hoc, an American memorial full of war re-enactors in costume and actual American and German soldiers visiting for D-Day 75. Pointe du Hoc was a fascinating site with German bunkers and gun batteries scattered along the sea cliffs, which we could climb in and explore. It helped to give a better idea of the difficulty of the objectives on D-Day given the tight German defensive positions along the Atlantic wall.

Next we visited the American Cemetery at Normandy, where nine Canadians were buried after the American invasion on Omaha Beach. We were unable to walk through the cemetery as it was cordoned off but the sheer size of it was still impressive. We also saw Osprey V-22’s and Blackhawks flying back and forth overhead that was impressive as well. The Operation Overlord Museum was also very interesting and the exhibits were put together really well.

We ended the day of exploring in Bayeux. We got to see the Bayeux Tapestry and it was beautiful. It is amazing that something so frail has survived as long as it has to be viewed by us today. It was very special to be able to see it in person.