Knowing Your Limits, by Colleen Molloy

As the tour goes on, I am continually amazed by all that we have done, seen, and talked about. For me, I have most enjoyed my fellow participants’ soldier presentations. I have been absolutely blown away by the amount of dedication and research my travel companions have put into them and they have made me both proud and grateful to be a part of this tour. They’ve shared stories of soldiers that I would probably never have had the chance to hear about and have taught me lessons that no history textbook or university lecture could ever convey. So, to you all, I give my wholehearted thanks for making this trip so special and memorable. 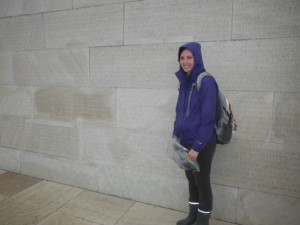 The more I learn though, the more I am reminded of how much I can never fully understand about the World Wars and the men who fought in them, no matter how much I study or how detailed the soldier presentations are. When I reflect on my own presentation, I realize how much I struggled to recreate the life of my own soldier, Robert Galloway. He was only 18 years-old when he enlisted and 19 when he died. How was I supposed to know who he was when maybe he hadn’t had enough time on this earth to figure it out? I realize now the immense divide that exists between me and the soldiers of the World Wars. No matter how much we uncover, there is really only so close we can get to them, because they remain untouchable in more ways than one. They not only lived in a different time, but they made choices and sacrifices that in 2013, seem inconceivable. These soldiers left their families and their homes in Canada to fight a war thousands of miles away. Some were older when they left and some were very young, but no matter their age, they put their lives on the line to ensure that we could have a future, even if they didn’t know it at the time. It is hard to understand what this felt like and even harder to know how we could ever appropriately thank and commemorate them. However, my companions have shown me that with a little determination and a strong understanding of the historian’s craft, we can gain a glimpse into who these soldiers were and what their war experiences were like. Letters, personal files, and pictures can serve as a window into these men’s lives and, perhaps for many, the most significant thing they ever did: serve their country.

Another aspect of the tour that has struck me is the enhanced perspective that is gained by walking the land and trying to retrace the soldiers’ footsteps. Upon arrival in Dieppe, we visited Blue Beach (Puys) which was a part of Operation Jubilee. Although it is a peaceful and quaint city now, in 1942 it was the scene of a Canadian raid which was accompanied by heavy casualties. Of the 6000 soldiers who left the English Coast, 5000 were Canadian, making Dieppe one of Canada’s first significant contributions to the Second World War. The landing on Dieppe was the only large scale assault on the coast of German occupied France prior to the Allied landing on Normandy. At the time, the belief was that a seaside assault would allow the Allies to test the feasibility of seizing a harbor. Of the 554 men who left for Blue Beach, only 65 made it through, a toll that unfortunately seems fitting given the immense challenges facing the soldiers. They arrived 35 minutes late, losing the element of surprise. Many destroyers were ruined before they could even make it out of the water and a tall seawall topped with barbed wire greeted the men who did manage to make it ashore. Now, I certainly don’t need to visit Dieppe to learn these facts because I can get this information from a good history textbook. However, the latter will not accurately convey to me the unpleasant feeling of the rocks against your feet as you stand there, looking up at a massive seawall trying to understand how these men made it into the city. As we explored the beach, many of us struggled over the rocks, slipping and getting our feet caught and we only had our backpacks and cameras to carry. In 1942, Canadian soldiers would have been fully equipped, trying to coordinate an attack in an area that gave them every disadvantage. Again, although I can never know what it felt like to be there, the land conveys, without any need for words or explanations, how incredibly difficult the task of a Canadian soldier was on August 19, 1942.