Facing the Past, by Becky Weir 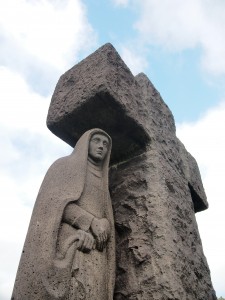 Just keep breathing. In and out, in and out. The moment had come. There we were standing in front of the La Cambe German War Cemetery. Why was I nervous? I knew this site was on the itinerary, and I knew I would walk in without shame, without reservation. But so much had happened on this trip, so much had affected me that I couldn’t be sure of my academic self anymore. But it was now or never, and so I took the plunge and entered the gates of La Cambe.

My academic background could be considered controversial at best. I study Nazi Germany, and in particular I have always been fascinated by the issue of collective guilt, and how the Germans have dealt with their WWII legacy. When someone says “Hitler was crazy, that’s all,” I am the first one to list off the reasons why Hitler and his henchmen were not crazy, and were in fact relatively rational individuals with terribly immoral goals. I don’t do this to defend Hitler and leading Nazi Party members, but to resist the notion that there is an easy answer to the many questions we have of National Socialism. Once we begin generalizing, we then also begin to omit portions of the historical record. As a historian, I can’t allow that. During my undergrad I realized how enraged others become when you challenge their traditionally held view of the Nazi period, and I knew I had to find the truth these commonly believed generalisations.

This path led me to study the issue of German war guilt, and now, completing my MA degree, I find myself mired in the complexities that constitute the question: how guilty were the Germans? Again, generalisations abound. “All the SS were monsters!” “The Wehrmacht murdered thousands of innocents on the Eastern Front!” Undoubtedly, there were SS officers and Wehrmacht soldiers who committed unthinkable atrocities in the name of National Socialism, Germany, or simply for themselves. We know this is true. But we also know, that Hitler Youth members of the 12th SS Panzer division were born and raised completely indoctrinated in Nazism. Christopher Browning’s watershed Ordinary Men illustrates in part that some men did not want to kill Jewish women and children on the Eastern Front, and their reasons for doing so were complex, and must be understood. This is not to say these men deserve our forgiveness or are excused, but we owe it to ourselves, the victims and the Germans to understand the complexities behind the generalisations. This is the academic path I walk, and though I often face controversy, in the end I cannot turn away from the details hidden within the historical record. I must understand. I must look history straight in the eye.

Before this trip I knew who I was. I knew I would walk into La Cambe – not to forgive or lament, but to face history dead on. The men in La Cambe include members of the 12th SS Panzer division, who murdered Canadian POWs after the Normandy beach landings; SS-Sturmbannführer Adolf Diekmann, who was present at the Oradour-sur-Glane massacre on 10 June 1944; Wehrmacht soldiers who killed not only Canadian soldiers in combat, but also French civilians. We know these men are buried in La Cambe, along with soldiers, some as young as 16 years old, who wanted to defend their country, or sought glory on the battlefield. German men of all kinds are buried in La Cambe.

A professor I greatly admire, told me not to go into La Cambe, knowing full well I planned to go in anyways. When he visits the battlefields, he declines to enter the German cemetery. Initially, I couldn’t fully understand why a historian would actively refuse to enter a site like La Cambe. After visiting the numerous cemeteries and reading the sorrowful epitaphs, imagining how I would feel if my partner, brother or father had been killed in the war, I began to more fully understand why my professor and others choose not to enter La Cambe. I do not condemn their decision; in fact I respect their conviction. At the gates to the cemetery, I began to lose my nerve and found myself questioning my motives, and wondering if I was right to enter the site.

The night before our planned visit to La Cambe, a discussion took place amongst a few of our tour members at Le Moulin Morin. The discussion was heated, as so many good academic debates are, and touched on core issues surrounding La Cambe. Could we go in there just for the sake of the Germans who did not commit atrocities? Why is La Cambe on the itinerary if some professors won’t even go in? What purpose does entering La Cambe serve us? Why would someone want to see those graves? The answers to these questions, if there are any, are deeply personal, and we certainly did not reach a consensus on any of them. But that’s okay – in fact this episode confirmed for me that this historical debate is far from over, and I hope against hope that the Canadian Battlefield Foundation keeps La Cambe on the itinerary so the discussion can continue.

All this talk of why and how led me to wonder about the families of those buried in La Cambe, and what controversy they faced when visiting their loved ones. For decades following the war, Germans carried the collective shame of having participated in the Nazi-initiated war, and the utter destruction of the Jews and other groups deemed a threat to the Aryan race. In the end, regardless of how much restitution is paid, memorials are raised, or apologies are given, Germany’s history will always contain the atrocities of the Second World War. It will always include l’Abbaye d’Ardenne, Auschwitz, the Einsatzgruppen and the Warsaw Ghetto. Though the methods and messages have altered throughout the last 70 years, Germany continues to publicly remember its past, not only for the sake of the victims, but for the sake of Germany’s future.

When I came back to Canada, I discussed this portion of the trip with my friend Matt. He didn’t come on the trip, nor is he a historian, yet he has an unsettling ability to say in a few sentences, what takes me several paragraphs. I bluntly asked him if I was wrong to want to go into La Cambe, and I told him about the different types of Germans buried there and the controversy surrounding the site. Matt eloquently described exactly why I feel it’s necessary to visit the German cemetery: “If we choose to judge the Germans based on the worst of them, then we have no right to judge another group, or ourselves any differently.” While this interpretation leaves ample room for debate, I think it accurately describes how I felt at that moment, at the gates of the cemetery. I walked into La Cambe because while my confidence had been shaken, I knew I had to face the worst, the young, the brave, and everything in between.